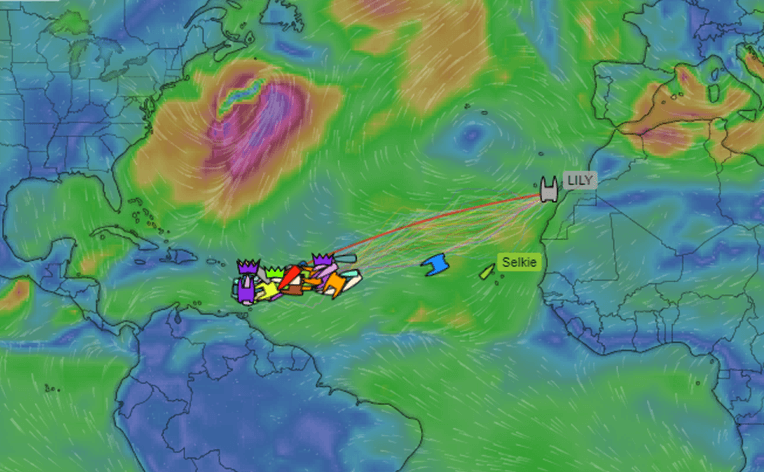 One after the other the cruisers are entering the port of St Lucia in the West Indies. TY Pierre III, a First Line* version of the Oceanis 51.1, finished the race on Wednesday 9 December in fourth place overall. TY Pierre III was one of the 24 sailing yachts that set off on 8 November from Las Palmas in the Canaries for about 30 days of sailing to the Caribbean. Crews can enjoy sailing across the Atlantic with a fleet for the first time in the annual Atlantic Rally for Cruisers (ARC).

Unlike the traditional ARC, the contenders in the ARC Plus stop over in Mindelo in Cape Verde. Two other Oceanis owners have joined the adventure this year, the crew of Maka an Oceanis 46.1 and the crew of WEYVE on a Cyclade 39.3.

The crew of TY Pierre III photographed just before the start of the race in the Canaries (source: Facebook ARCrally).

The ARC – the Best Transatlantic Race

A Safe Regulated RaceThe Atlantic Rally for cruisers was created in 1986 by Jimmy Cornell as an ultrasafe alternative to single-handed transatlantic races. It is open to everyone, including families with children, hard-core racers, and cruising couples on monohulls or multihulls. The World Cruising Club teams, often referred to as the ‘yellow shirts’, do their best to provide a safe racing environment for those taking part. They check everything before the start: boat, equipment, and crew. Once at sea, the organization keeps an eye on the participant’s progress with satellite tracking. They send weather and position reports by email, and also act as the main contact in the event of an emergency.  Safety comes first in this rally!

Want to sell your boat?
Email us now